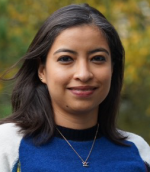 Tania Guillén Bolaños is a Ph.D. researcher on evaluation of adaptation. Previously at GERICS, she participated in the preparation of the special report on "Global Warming of 1.5ºC" of the United Nations Intergovernmental Panel on Climate Change (IPCC) as chapter scientist, contributing author, and drafting author of the Summary for Policy Makers (SPM). She is also contributing author and reviewer of the Working Group II's contribution to the sixth assessment cycle of the IPCC. Furthermore, as fellow of the International Climate Protection Program of the Alexander von Humboldt Foundation at GERICS, she developed tools for climate change adaptation planning.

Tania has worked concerning environmental issues at the local level in Nicaragua and also at the global level, following the climate negotiations of the United Nations Framework Convention on Climate Change (UNFCCC) since 2010. In addition, Tania is GERICS representative in the NAP Technical Working group led by the UNFCCC's Least Developed Countries Expert Group (LEG), which aims to support countries' national adaptation plans efforts.

She holds a bachelor's degree in environmental quality engineering from the Universidad Centroamericana (UCA, Nicaragua) and a master's degree in natural resource management and technology from the Cologne University of Applied Sciences (TH-Köln, Germany). She was awarded a DAAD scholarship for her master's studies and selected as an international climate protection fellow of the Alexander von Humboldt Foundation in 2015. Since 2016, Tania has been part of the technical staff (ad honorem) of the Latin American and Caribbean Group on Climate Finance (GFLAC).